Bumblebee! That’s the first name that pops up in my head the moment I see the golden-yellow Pulsar 200 NS. The resemblance doesn’t end with the colour. If you look at the bike head on, the headlight looks very similar to the face of the Transformer’s character by the same name. 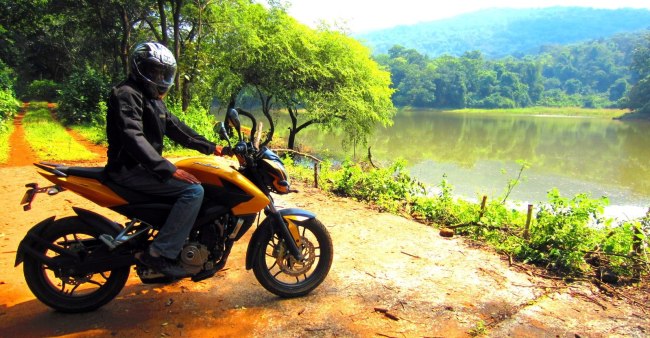 I had been itching to test this offering from the Bajaj Auto team since it’s been launched. So, I pounced at the opportunity the moment my friend Talha, requested me to get his Pulsar 200 NS from Calcutta to Jamshedpur. His bike, which he christened as Zaira, had clocked around 3000 kms and just out of routine servicing when it got dropped at my end two days before the trip. I wanted to ride it around town to get used to the riding posture and also check the bike for any issues before the trip.

I have had a Pulsar 180 Classic, round head lights, steel rims, and the first model. I loved that bike a lot; however I was very disappointed with what Bajaj Auto had to offer all these years. When Bajaj launched the Pulsar 200 NS, I liked the fresh look and feel, however wasn’t really sure if the engine had much changes. On further probing found a lot of similarities between the 200 KTM Duke and the 200 NS. Even though the company officials might give you a twisted answer, we all could see where the lineage comes from.  This link got me interested, had the Bajaj Auto guys managed to find a way to offer the 200 Duke package in a cost-effective way. There is a difference of a little over 50K INR between the prices of the two.

Coming back on track, the first thing you would notice apart from the striking looks is the height of the bike. The rider seat is pretty high and I, at 5.8 feet, had just managed to keep both my feet on the ground while sitting on the bike. The seat is very comfy, both for the pillion and the rider. High seating is very similar to that of the Duke and also provides a good view of what’s ahead, especially in stop and go traffic. Really helps finding gaps to squeeze through. That brings me to the point of control. The upright seating and ergonomics make the bike very flick-able and cutting through traffic is a breeze. The bike is light weight at just 145 kgs, which is evident from a lot of fibre and plastics used for the cosmetics of the bike. It would also make it cheaper to replace in case of accidents.

Riding around Calcutta traffic was fun with good amount of torque at the twist of the throttle. Initially though I made the engine knock at low speeds, I noticed that the low-end torque was less compared to my regular bike. After some trial and error I found that the power delivery is evident post 4K on the RPM.  So, the trick was to keep the engine running above that to avoid knocks. The gear shifts are smooth, short and sweet. The clank and false neutrals of the primitive range of Pulsars’ are nowhere to be seen. Due to the traffic I really didn’t get the opportunity to open the throttle to get a feel of how fast it could go. That had to wait, till I hit the highways. I was still trying to figure where the 23.52 PS were hidden.

The digital meter console had the usual tell-tale lights and also a clock additionally. I found this a very useful feature. The ‘low fuel’ indicator is on the face scaring you to fill the tank with around 2 litres left in the tank. All the switch gears are highlighted with blue backlight, which makes it visible, even in the day. Apart from being functional, it sure is eye candy.

Till now the bike had kept me interested, with only a couple of things nagging me. The rear view mirrors are useless. It’s small, cumbersome to adjust for adequate rear view. In fact you can see everything, except the rear of the bike. The way it’s positioned, it’s honestly of no use. You have to adjust your head to get a hang of what’s behind you.  The tires … Bajaj Auto, I’m disappointed. I really wish you guys had given the MRF Revz at least. Sure, the tires are beefy at 100/80 -17 & 130/70 -17 at the front and the rear respectively. But it sure lacks the chipkoo feel of the Revz which come standard on the R15s. It’s like you have given the massive breaks to stop the bike, but what’s the use if you don’t have the tires to complement. ABS would have been a plus point in such cases though. I hope they at least add it as an option soon.

So, the next day I gear up and leave Calcutta at 4 AM. It’s dark and the head light is good, not great, mind you. It was good but not good enough. You can’t blame me when Bajaj has spoilt us with the projectors on the 220. I wonder why they chose to keep away from projectors on this offering.

The roads till Kharagpur (NH6) are amazing, part of the Golden Quadrilateral. I was trying to do this stretch of 130kms at the earliest to compensate on time that would be lost in the bad stretches beyond Kharagpur. The Pulsar 200 NS DID NOT let me down at all. It is a beast beyond 6K on the rpm. Cruising at 120kmph on the 6th gear, yes you read that right, this baby packs six gears to transfer all that power on to the wheels; So, cruising at 120kmph and you feel like overtaking something, there is no need to downshift, just twist the throttle and the surge you feel is exhilarating. I could now figure what they did with the triple spark plugs squeezed in the head of this engine. Each of them kicks in only when required. That, I believe, would also make it overall a more efficient engine. I obviously did not have any instruments to test the theory but the surge in power is evident at 4K & 6-7K on the RPM. It seems like the 2nd and the 3rd spark plugs kick in at these RPMs respectively. I had already touched 150kmph and it still felt like there is more to go. This beast is a hooligan and I was grinning all the way inside my helmet.

But Mother Nature had other plans, just 50kms away from Kharagpur and around 35 minutes from the starting point, I encountered heavy fog, speeds dropped to a mere 50kmph and by the time I was 35kmph from Kharagpur the fog was so thick that I had to stop. It was 5AM already, so waiting for the sun to rise was the best option.

For people who know the route, the New Kolaghat Twin Bridge has been opened and now we no longer need to wait for the traffic jams to clear at the old bottle neck, the old rickety Kolaghat Bridge.

By 6AM I had crossed Kharagpur and left the Golden Quadrilateral heading to Baharagora, the border town between West Bengal & Jharkhand States. Now, it was time to test the Pulsar 200 NS’s competency on bad roads. The ground clearance was more than needed, at the only other time I have felt this comfy, on this stretch, on any other Indian bike is on a Bullet Classic 350. In that case it was a heavy bike and spring seats. Here, it was however a different story altogether. The suspension which felt adequately firm for high-speed cornering was doing an amazing job cushioning the potholes and the uneven roads. That combined with the comfy seats gave a combination which was soothing to my bums. I soon realised that I could actually manage good speeds even when there were practically no roads and I was happily going off-road to negotiate the pot holes. The standard MRF Eurogrip was great on loose gravel and I will surely add that slides & drifts were fun. I sure missed ABS a lot; I hope they will soon add it as an optional offer. In less than an hour I was across the border in Baharagora.

I surprisingly didn’t feel any fatigue, which I usually do, probably due to bad seats and a super firm ride, on my regular bike. I was still grinning at oodles of power and the trip was far from over. I still had 100 Kms of the worst roads on this route left. I was still able to keep an average of over 50kmph and I was mostly where the bike felt at home. Off Road! Keep the engine running over 3K on the RPM and the bike just takes off after every breaking. By the time I reached Jamshedpur at around 8:20AM I had done close to my fastest nonstop run yet on this route of 4 Hours 10 Minutes on my Yamaha R15v2. Please note that I was slow and standing for around half an hour due to the fog.

Over all I would say that the Pulsar 200 NS is an excellent buy at the south-side of a Lakh in INR. A bike with an amazing capability of handling whatever you throw at it. Be it smooth roads or the worst off-road possible. The Pulsar 200 NS will chew it and spit it out.

To sum it up, did the Bumblebee make me grin all the way from Calcutta to Jamshedpur? Hell Yeah!!!

Motorcycles, life & everything else in between.